I had an idea for TARDIS Car Keys that could lock the TARDIS that is linked to it from a certain range.

This is a canon item as it is shown near the beginning of The End of Time - Part One, where The Doctor went to the Ood planet, and locked his TARDIS using what appears to be a set of car keys at the click of a button. It would be useful as if you’re quite far from your TARDIS and someone is running to get inside and use it, you could lock it. It could also be used just at your leisure if you’re too lazy to go up to it to lock it. It would only not be useable when the TARDIS is open, and it would only work with the TARDIS you link it to, like the stat remote. 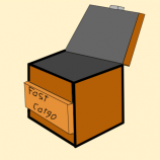 I could definitely use this on DMU and in my survival worlds, that would be cool!