im only banned for a day

I was collecting wheat and Josia said to fix the farm (I used a bucket) Firstly, then I talked about how ambient built his road through my town. At the time I thought that was griefing. Is it??? Then I said I was planning revenge as a JOKE so I did start fixing it and I was banned halfway through I only got to fix one but then I was banned :( for declaring revenge????

I don't really understand why I was banned

so you were banned because you were Griefing Ambient City by placing down water all over the place. You were doing this whilst Josia50 was watching you do it. When questioned about it you lied to him denying that you did it and then refused to fix it. You did eventually admit you griefed saying that Ambient griefed your city so you wanted revenge. 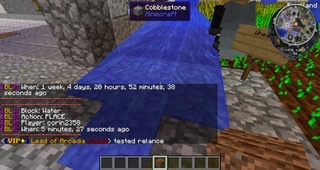 As you lied to staff when questioned and this is only a 24 hour ban your appeal is denied.