Kirkendalld was banned today at 5:15pm EST Due to his crashing of the server.

The server was told to avoid cave game and bridging out of it. Kirkendalld did not listen and there are now 3-4 copies of  him infinitely falling out of cavegame. When ever he joins the server the server is unable to handle the fifth ID of "Kirkendalld" and crashes for everyone. With that being said to save the server and its players I have temporarily banned Kirkendalld until a time where the server can be reset and the multiples can be removed.

Requesting a server reset and THEN an unban on kirkendalld.

A barrier field should be placed around the borders of cave game to prevent this again, this problem is getting more frequent..

I agree with you. I'm going to do that tonight when I get home.

Alright. Ill see what i can do to get it started for you

bedrock base and barrier walls and top established

Boy, some people REALLY think it is a good idea to disobey staff and the server rules, there's rules for a reason. Hope this gets solved. 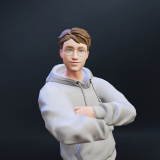 If you want I can help you 411man with the barriers :D

I already finished them,thanks for the offer though, and i don't think that's an official rule yet it should be though.

Update: Server has been reset Kirkendalld is now pardoned