Yess, the crossover you’ve all been waiting for. Well no, none of you want it but guess who has no articles. Oh yes, that’s me. Welcome to reviewing Acen’s Articles (100 percent won’t be biased). In this article we will be deciphering Acen’s secret formula for banger articles. So I can take it . Nah I would never do that. It isn’t like this article is a rip off of Acen’s article. Or anything. Pshhh I haven’t sunk that low.

Let’s review his article before he became an official writer. “How to make a successful shop” by Acenp4. Now then we all know Acen owns the great Kingsman so surely he has state of the art tips which could benefit us all. Guess what, he does. He offers 3 different types of shops and as we all know 3 IS THE MAGIC NUMBERRRRRR. This obviously gives this article a 10/10 - It’s well thought out unlike my articles, it has an actual structure. It isn’t a shambles. It’s pretty solid.

Now then let’s see if his articles after he became an official writer is up to par or has the pressure of deadlines got to him? Has our favourite rat started procrastinating? Well I’m happy to inform you that his article “Guide on making a faction” although using a similar format improves the original and makes it far superior than the others. Now I can’t rate it higher so I’m just gonna put it as an 11/10.

Well then let’s review one last article of his. It is of course him reviewing my articles. Inception. So then what do you believe I think of his ratings in “Reviewing Murder”. WELL FIRST OFF IT WASN’T RIGGED YOU WERE A SHAMBLES I LOST MONEY CUZ OF YOU SMHHH. Other than that, it was a great articles some nice ratings cuz Acen knows if he puts anything under 8 he’s finished.

Well that’s it! I hoped you enjoyed this article very poggers amirite or amirite. Anyways it’s time for the quiz!!! Also sadly there will no longer be a prize for the quizzes due to recent events. Still do them tho. Pretty please. 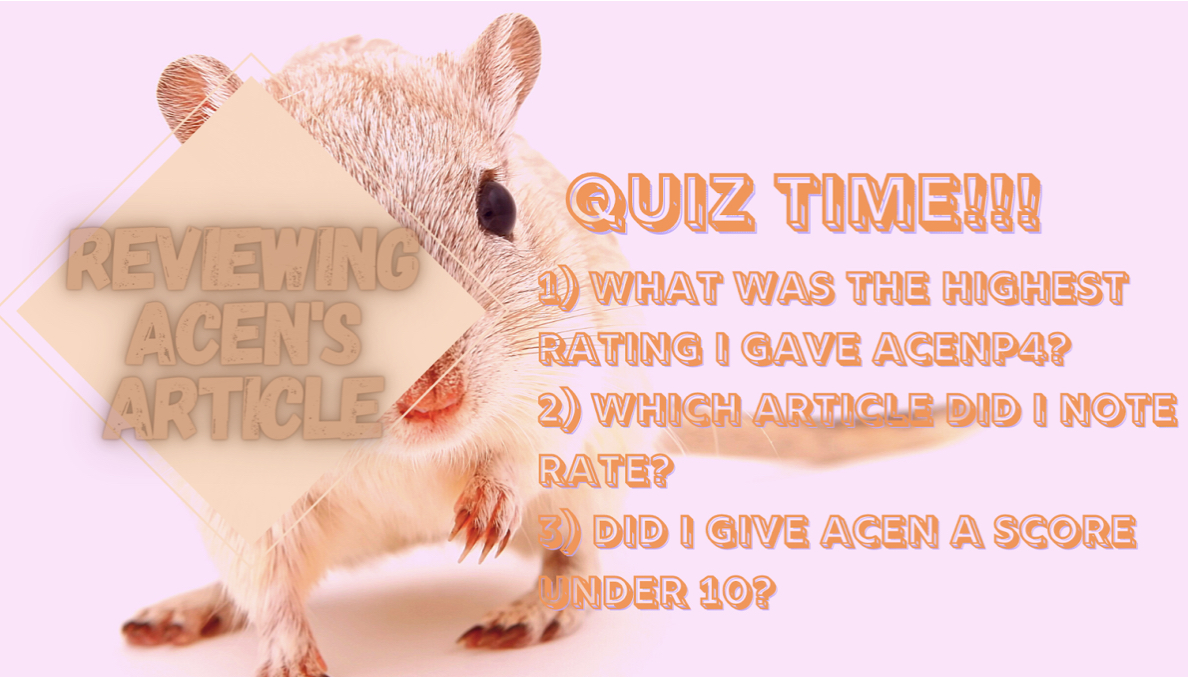