With the Vortex Manipulator being re-added to the mod in U50, within the 13 (soon to be 14) updates since then, there have been little to no changes. Here would be some new mechanics, changes to existing ones, and a new recipe for The Vortex Manipulator.

-GUI: The current GUI for the VM is bland at best. Lacking the visual flare of something like the tardis monitors. The new GUI would be a "holographic" overlay, functioning as a dumbed down version of a tardis monitor.

Information: the home screen of the VM would display basic information; Current dimension, current co-ordinates, and the remaining charges

Dimensional Travel: A mild carry over from the tardis monitor, the interface would be near identical to the tardises dimension selection. Allowing the VM to not only access all the current dalek mod dimensions, but even allow dimensions from other mods.

Waypoint Bank: This would merely be a screen where the player would choose from up to 5 waypoints to jump to.

-Charge: The VM's charge system would be re-written. It would have a set charge amount of 100%, with a limited amount of resources used as fuel for the charge. 1 co-ordinate jump taking 5% charge plus 2% every 100 blocks from origin, 1 dimension jump taking 10%

-Scan Function: a subsidiary function that can allow the VM to scan an entity, providing the entity's name & current health. 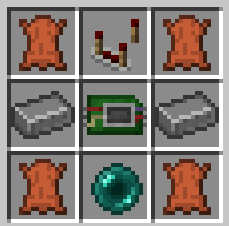